Below is an image of another batch of letters I have deliver to local Herefordshire County councillors, today 10th August 2020, asking again for them to forward an enclosed letter to Stephen Vickers (Director of Adults & Wellbeing at Herefordshire Council). 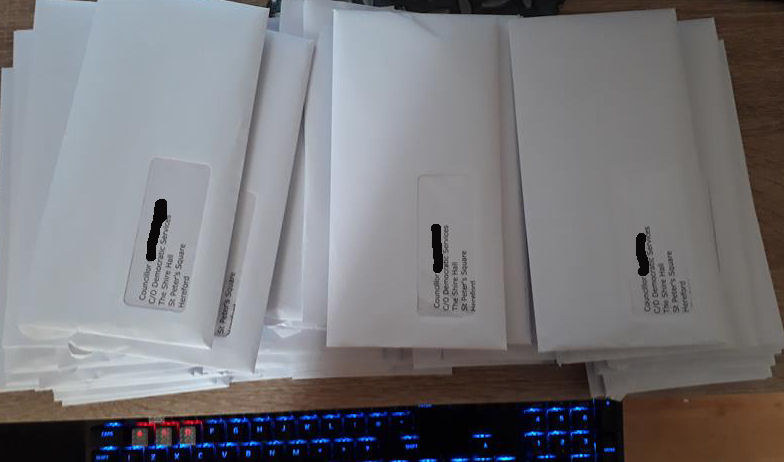 In the letter, I have asked that SV cease avoiding accountability and responsibility for his and his colleague actions, inactions and libellous accusations, and to handle the return of property and the claimed detailed police report, personally and promptly. Notably, as I still wait for the declared detailed police report to be sent to my solicitor after requesting for such repeatedly from Herefordshire Council.

I did, however, receive a letter from AM, (part redacted copy below) one of three individuals I complained about and who were involved in concealing concerns and incidents I reported regarding my brother, and fabricating criminal offences against me.
Further, the detailed police report was not attached to the letter, as AM claimed.

I believe it is highly inappropriate and unprofessional for, SV, a director of adult social care who claims to specialise in law, have a colleague AM contact me the victim of their vexatious accusations and executed attempt to have me imprisoned, and which assisted in destroying my family.

However, as SV chose to wilfully ignored the concerns and incidents I reported regarding my brother and blocked communication, to avoid further knowledge, I perhaps should not have been surprised by SV’s disregard and action.

I suspect further foul play by SV, AM and colleagues, as the computer can be delivered to me but not to my solicitor without a claimed ‘possibility of damage’, and as mentioned the detailed police was missing and has not been sent to my solicitor.