Skip to content
July 25, 2021October 5, 2022 whileincare
Herefordshire Council, Worcestershire County Council, the CQC, the Local Government Ombudsman, The Priory Group and Onside advocacy advocates.
All knew of the misuse of Diazepam.
All knew of or heard recordings of carers stating the fluid restriction lasted months (which I still have secured).
Yet, all chose to ignore or were active in covering up the extended incident.

Is it really so difficult to hold those responsible to account and apologise? it appears so and that covering up is the preferred choice and course of action.

Below, are extracts from conflicting records of organisations regarding the fluid restriction I reported. 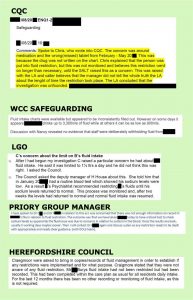 The above raises serious questions such as:

The sole reason I surmise: too protect individuals of organisations involved from Herefordshire Council & Priory Group.