Below is a redacted copy of my recent letter, sent via recorded delivery, to Stephen Vickers – Director of Adults & Wellbeing at Herefordshire Council.
While I should have proof-read it before sending, I think it’s reasonable.

Since SV extended punitive restrictions regarding communications, in 2018, while I was an unpaid carer, he and particular colleagues have disregarded all emails and letters for property to be returned to me. The property they refused to allow my brother to keep, and which I have supported him with for many years until he was placed in Priory Group ‘care’. I can only assume such is one of the distressing tactics used to delay, hinder or prevent individuals like me from seeking redress of their complicity in concealing incidents.


Below is my postal receipt and signed for proof of posting, as many letters appear to be disregarded and emails deleted or lost by Herefordshire Council

This post, another long one, will likely not surprise anyone who has been reading this site’s blog for the past years. My bother has again been denied of coming home to celebrate his Birthday, The Priory Group and their home manager disregarding a Court of Protection contact schedule. It has taken Herefordshire Council a total of nine years to destroy my family.

The feeble excuses used on this occasion?
Bad weather, and an allegation that I am unable to support the family member I grew up with since the age of 10 months old, and who I helped support at the family home for over three decades.

Below is the email response I received from the manager of the Priory Group home, on the morning of my brother’s Birthday. While readers may find it appears as though the manager is making it is superficial.


The second paragraph of the email response refers to a letter which was not attached to the email. Regardless I have been banned from visiting my brother or giving him any device that can record audio or video since 2017, with no apology or written retraction from The Priory Group.
Regarding contact via Skype, as you will see and read below, I attempted to arrange contact. The Priory Group have had Skype details for several years as of writing this blog entry and only allowing a total of 3 minutes contact in the past three years and since Court of Protection involvement.
Additionally, SK says I should speak with AW or RO, both Priory Group employees who have neglected my brother previously. Which I can evidence and which Herefordshire Council social care staff and advocacy knew of yet helped conceal incidents.

I next attempted to arrange Skype contact with my brother, after taking some time to recover from the effects of extremely high blood pressure, initially caused by the extended distress Herefordshire Council & The Priory Group have caused, and on this particular occasion, BP raised due to the manager not allowing my brother home for his Birthday. Below is the email chain, which too would be plausible but for the falsehoods, which I will reveal.


In SK’s reply email, he agrees to support Skype contact at the accepted time, contact details of which were agreed two years ago at a meeting with solicitors.
The attached images I will come back too.

In the next paragraph of SK’s reply, he says two calls were made to me, one on 24th March 2020, a day I was by my mother’s hospital bedside, alone and comforting her while she slowly died. Something I would not wish for others to experience., but for those that are there for their loved one at the end, they should be prepared and have the mental strength to deal with what they witness, and the grief that follows.

The next two short sentences in SK’s reply, regarding my questions are both concerning and conflict with previous responses. What I consider most worrying is that it has taken since 11th May 2020, when testing was made available to all care homes, until the second week of June 2020 for the Priory Group manager to request coronavirus testing kits.

Next, SK conveniently uses the deletion of email under a 60 days policy, appearing to forget I keep all Priory Group communications, which incidentally I have none regarding the claimed Skype calls nor in fact any form Priory Group staff regarding the arrangement of Skype contact, as supposed to be the case to comply with Court of Protection order.

This now brings me to the pictures SK attached to the email as claimed evidence of calls being made.

I have examined the pictures forensically and find inconsistency within them. However, I will just state the obvious that can be seen in the images.
Only one of the images provides any evidence of the person they claim to contact, this the redacted image of 24th March 2020, yet it’s not to me or the agreed Skype account.
I am also mindful that it is not my brother’s Skype account, partly because the image says ‘no mutual contacts’. My brother has family contacts listed for his convenience in Skype, and I helped him some time ago, when he had rare visits home, to learn How to use Skype; which took considerable time due to the shortness of visits. Regardless of these inconsistencies almost all of my attempts to arrange Skype calls have been ignored, but for three minutes since 2015, or met with various excuses for not allowing Skype with my brother or for him to visit.

The below video is a screen recording as some proof of just how little contact my brother has been permitted with me and our mother between 22 May 2018 to 20th June 2020, sadly she has now gone and her wish for my brother to return home or move closer to us, is now a battle I have to continue in her memory.

Below is the email chain regarding my request the Priory Group home manager, for my brother to be at his family home for his Birthday.

As of publishing this at 8.01 pm, I haven’t received a reply to my response to the manager.
I do wonder how many families have to endure such complication when trying to see a member of their family, who they grew up with and help support for 36 years.


In my email response, I have asked the Priory Group home manager to provide Skype contact logs and copies of emails sent to me, regarding the request to me from the manager and staff on behalf of my brother for contact.
I have asked for these pieces of data as I am confident this proves none exist nor have any attempts been made to support my brother with remaining in contact. Only receiving one email since March to unlawfully deny my brother of attending our mothers funeral; with mine ignored.
Priory Group, however, will delay and make specious & spurious excuse not to provide information and eventually say it was accidentally lost, as has happened previously.

I’ve not only lost my vulnerable adopted brother to The Priory Group, after almost 9 years of battles with my LA and due to their staff & Herefordshire Council lying even to the Court of Protection to conceal neglect & ill-treatment, I now find Herefordshire Council has lost my personal data.

Additionally, due to the punitive restrictions Herefordshire Council imposed, they have:

Below is a redacted copy of my recent letter to Herefordshire Council regarding their refusal of council tax reduction, claims of not receiving documents, and the loss of my data. 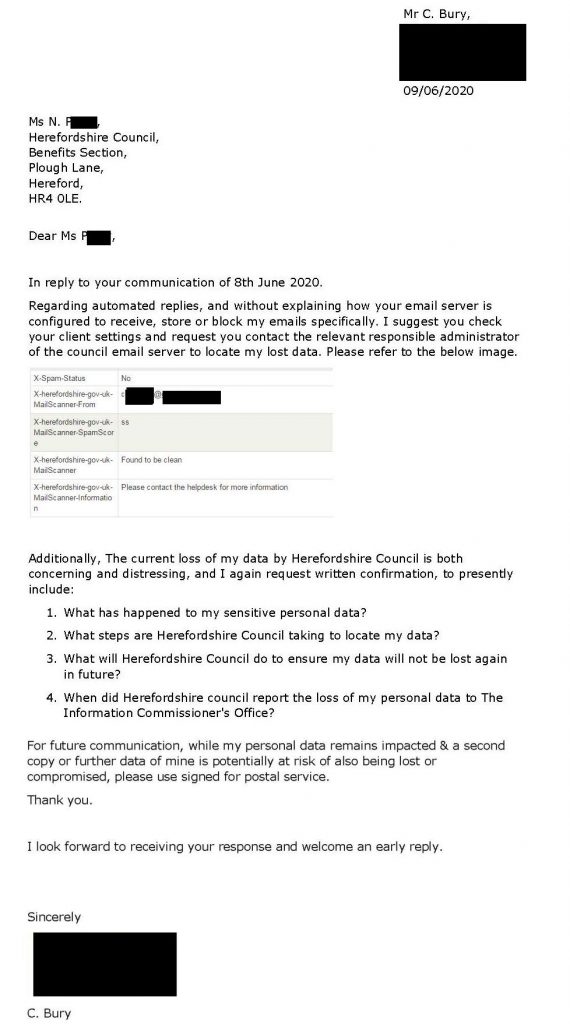 This post displays that not all of us who cared for a vulnerable elderly parent and adopted sibling, have a supportive family.

As my mother’s funeral approached I contacted one of my estranged sisters who are claimed to be in regular contact and visiting our vulnerable brother, for her and my other estranged sisters to make arrangements for our brother to attend our mother’s funeral, due to Priory Group & LA ignoring my requests until mere minutes before the funeral to inform me of their refusal to allow my brother of attending with me.

Below is the email response I received from the estranged sister. Knowing this, I note care records for years have greater false content than already revealed. And Herefordshire Council social care staff were willing and to and did use deceptive claims about family members.

The above email, from the same estranged sister, who in social care records, made an allegation she would not visit our mother because of my behaviour.
My behaviour, I would not speak with my estranged sisters and sit in another room when they did rarely and briefly visit our mother, for mere minutes.
The same estranged sister who had LPA with me yet abandoned our mother and her obligation to her.
Even at the end of her life, my mother had none of her daughter’s comforting her during her last days or hours while she slowly died in hospital.
I will never forgive my estranged older siblings for their abandonment of our mother and vulnerable adopted brother, nor social care staff from directors down who have over recent years been complicit in fabricating their distressing and vexatious litany of lies and misinformation.